Beginning May 5, 1864, David Whitney's 10th Vermont Regiment was a part of an intense offensive by Union forces against the Confederate Army of Northern Virginia. In this push south towards Richmond, the 10th Regiment left the camp in Culpeper County nearer Washington for good. Many of the following days of marching and combat were accompanied by heavy rains, resulting in the discomforts and hazards of mud that permeated the paths, the fields, and the trenches the soldiers had to operate in.

Along the way David fought in battles in the Virginia counties of Spotsylvania and Hanover, including the last major battle of this campaign at Cold Harbor just east of Richmond . At Cold Harbor he was a part of a very bloody conflict that lasted nearly two weeks, ending on June 12 with no clear victory for either side.

On the first night of the push south, David's division formed the rear guard for the first elements in the column moving out to battle. The rear guard then camped overnight at Germanna Ford on the Rapidan River to secure that crossing for the Ninth Corps, which was to follow. 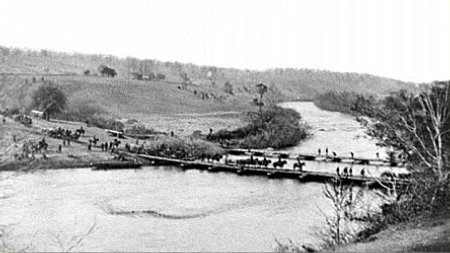 Image from Library of Congress Collection

Germanna Ford on the Rapidan River

The first battle in the offensive began the next morning, May 5th, at Wilderness on the Spotsylvania County line due west of Fredericksburg, Virginia. That morning, after the Ninth Corps column arrived, the 10th Vermont Regiment moved out with the rest of the 3rd Division along Germanna Plank Road toward the Old Wilderness Tavern.

The division set up at Wilderness Run along the Orange Turnpike, and David's brigade was dispatched south across the turnpike to be positioned at the left flank of the 6th Corps, where they could support the rest of their own corps plus the right flank of the 5th Corps. As the brigade moved across the road, Confederate artillery opened fire on them, killing two men from the 10th Vermont and wounding several others before they could scatter into the thick woods for protection. 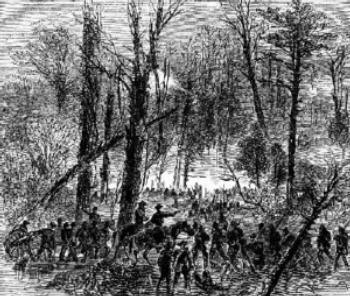 Thickets at the Wilderness

During the rest of that day, May 5th, the brigade held its position out of the direct line of battle but within earshot of fierce fighting going on on either side of them. They could not actually see the battle because of the wood thickets surrounding their position.

On the morning of May 6th, after spending the night in position along the Orange Turnpike, David's brigade was pulled back and held in reserve for most of the rest of the day. They were positioned just behind the battlefront and experienced enemy artillery shells whizzing overhead, with some bursting close to them.

Just before sunset, Confederate troops assaulted the 6th Corps line to the front of David's brigade's support position. That portion of the corps fell back, allowing the enemy to push through to the rear. David's brigade was then ordered forward, and so the 10th Vermont Regiment, along with one other regiment, flanked the movement on the double and succeeded in forming a line between the retreating Union troops and the oncoming Confederates.

When David's unit reached its new position and turned forward, their commander ordered the men to cheer, astonishing the Confederate troops and halting their advance. The Union's retreating 6th Corps troops were able to restore their position, and this tactic effectively ended the fighting at that location, as dusk soon settled in on the heavily-wooded area.

In this battle at the Wilderness, the 10th Vermont Regiment lost three men who were killed and eight others who were wounded. Union forces had many more total casualties than the Confederates and seemingly suffered a tactical defeat though not a clear loss. However, this time, instead of pulling back after the battle as they had done in several previous engagements, Union forces continued the Overland Campaign, advancing through Spotsylvania County toward their goal of reaching Richmond ready to face off again against Confederate forces who might be barring their path.

Late on May 7th, Union troops marched south toward Spotsylvania Court House, an important site for controlling the route to Richmond. At the same time, Confederate troops were assembling there for a defense of this position. David's unit, the 10th Vermont, was part of the movement southward, and on the way they passed the gruesome sight at Chancellorsville of skulls and bones left unclaimed and unburied after a fierce battle there the previous year.

The next day, May 8th, the 10th Vermont Regiment, along with the rest of the 6th Corps, took up a support position behind two other Corps. That evening, the 3rd Division, of which David's unit was a part, was drawn back from their position on the crest of hill and moved to the left. The following day, May 9th, was spent digging in at their present position, but under heavy artillery fire from the Confederate side.

By the time Union forces were digging in, Confederate troops had already set up reinforced positions across from them. At the outer edge of their line of entrenchments, Confederate forces had fashioned a semi-circular bulge, also called a salient, pointed toward the Union lines. The salient was in the shape of a horseshoe—or mule shoe, which is what the troops called the location, Mule Shoe. The shape of this salient allowed attacks from the side as well as from the front.

On May 10th and 11th, the 10th Vermont Regiment was up in the skirmish line, firing at the troops opposite them. On the second of these days, a contingent of Union troops attempted an attack on the Mule Shoe salient from the west side and succeeded in penetrating the confederate defenses, although ending up being pushed back.

As a result of this partial success, a more massive attack on the Mule Shoe was designed for the next day. On May 12th, the Union's 2nd Corps attacked the salient from the east and succeeded in surprising the Confederate troops there, who lacked artillery support. The Confederate command had misjudged the Union intent after the attack the previous day and had pulled out their artillery, thinking that the Union forces would be moving on. During this day's initial assault, Union forces captured more than 2500 Confederates, including one general. 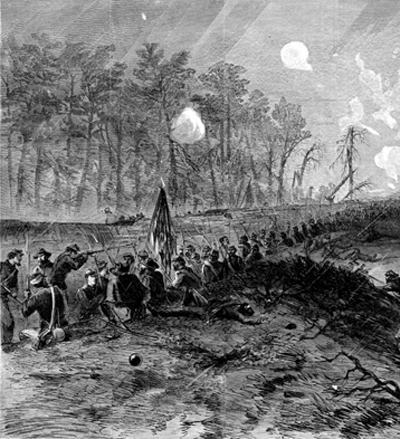 However, in the aftermath of the assault, as Union troops were distracted while accumulating war booty at the scene and in moving the large numbers of prisoners-of-war to the rear of Union lines, general disorder reigned and the momentum of battle was lost. The Confederate command mounted a countermove, in which they pulled additional brigades from their rear elements and managed to restore most of their original line of defense

At this point David's 10th Vermont Regiment became intensely involved as part of the Union's 6th Corps's assault on a corner of the west side of the salient that came to be known as The Bloody Angle. This battle earned its name from the amount of carnage that resulted from the very intense man-to-man struggles after Union troops had breached the log walls that had been set up as part of the Mule Shoe defense. Soldiers soon ran out of ammunition and resorted to using their bayonets and rifle stocks to ward off attackers.

David's company was not among the first to breach the Confederate lines at The Bloody Angle, as the 3rd Division took its usual support position in the Corps formation. But David and his Company G comrades did eventually charge the position as reinforcements, working their way through ground covered with dead Union troops who had moved in advance of them and finding, inside the salient, Confederate casualties strung all over on top of each other, as much as two and three deep, including the severely wounded among and sometimes under the dead.

The Last Week in Spotsylvania County

As combat subsided that night, the 10th Vermont Regiment pulled back to their starting position. During the next day, May 13th, they moved to the left to support an artillery battery, and that night, the entire 6th Corps was moved further to the left. At the same time, one of the 6th Corps divisions advanced toward the foot of a hill protected by Confederate troops and, after artillery bombardment, managed to take the hill.

David's unit, as part of the 6th Corps 3rd division, had moved up quickly in support of this offensive and had to make their way across the Ni River. The men of Company G waded through swift currents up to their chests but managed to keep their weapons dry by holding them above water as they crossed and their powder dry by carrying their cartridge boxes on their shoulders. The 10th Regiment reached the top of the hill late that night and subsequently entrenched there, where they remained for a week.

In the battles of Spotsylvania County, the 10th Vermont Regiment had one killed, seven wounded, and one who died later from wounds received there. This list of casualties was relatively low, in comparison to other units, as the 3rd Division was often held in reserve in support of the other 6th Corps divisions in this phase of the Overland Campaign.